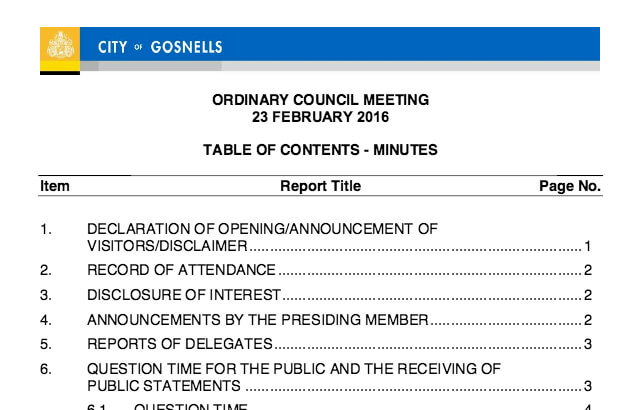 The City of Gosnells will not change the minutes of an ordinary council meeting despite calls from a legal representative acting on behalf of mayor Olwen Searle to do so.

In a document distributed to councillors by Mrs Searle, Timothy Howeling from Cornerstone Legal addressed allegations she had lied under oath about her residential address upon taking the office of mayor.

Ms Searle has faced questions about the matter over the last three ordinary council meetings, including a motion moved by councillor Glenn Dewhurst to discuss the matter further.

In the document Mr Howeling described the allegations as baseless and said that discussion should have been undertaken in a closed session chaired by the deputy mayor.

He said he was also concerned the council had published ordinary meeting minutes containing material that was arguably defamatory as a result of those discussions.

“It seems to us that an apology to mayor Searle JP and a withdrawal of the statements is appropriate in all of the circumstances,” it said.

“The minutes must be amended to remove defamatory statements. At this time however, while the matter is being investigated by the CCC, we do not intend to press this issue.”
City of Gosnells chief executive Ian Cowie said this would not happen.

“The minutes reflect what occurred and are a statutory document once confirmed,” he said.

“Council meetings are generally open to the public and can only be closed in accordance with the provisions of the Local Government Act.

“The mayor is unable to close the meeting, although council has the power to resolve to close part of a meeting to the public if that part of the meeting relates to a matter for which a meeting can be closed under the Act.”

A Department of Local Government spokeswoman said while a mayor could request that minutes be changed it can only be achieved through a resolution of the council.

“Publishing the minutes is not a breach of the Local Government Act, as minutes from council meetings are required to be made public,” she said.

The spokeswoman said there was no provision in the Act to stop a the mayor initiating proceedings against the city.

Mrs Searle denied she was calling for a change to the minutes and said it was ‘just the opinion of a lawyer’ though she confirmed Cornerstone Legal was where she had obtained legal advice.

“It’s just an opinion, I haven’t asked anything of anybody at the council,” she said.

“You can employ a thousand lawyers and get a different opinions and sometimes you can even get them to write what you want them to write; this must just be their opinion.”

She confirmed the document was handed out so people knew what her legal advice had been.