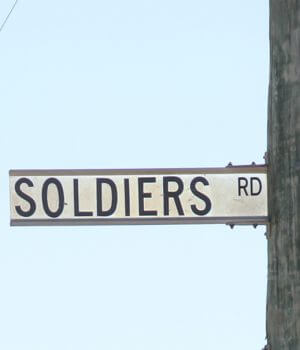 Serpentine Jarrahdale Shire officers were left in no doubt their proposed amendments to the Mundijong-Whitby District Structure Plan were not acceptable to the community at a forum on Tuesday night.

About 40 people turned out to discuss the proposed amendments including the closure of Soldiers Road in Mundijong.

Due to a misunderstanding of new planning and development regulations introduced in October last year the proposal was released for public comment and advertising prior to being endorsed by councillors.

The structure plan approved in 2010, which included moving the freight railway line east of Mundijong and two new level crossings, needed major amendments due to the State Government policy of no net increases in the number of level crossings.

The last new level crossing opened in WA was in Main Street, Gosnells in April 2005 after the Verna Street one was closed.

As the shire is working on a developer contribution plan, the infrastructure needs to be finalised and costed.

The major infrastructure cost is roads.

Mundijong-Whitby will be home to up to 40,000 people when complete and includes areas east and west of the railway line.

Among the concerns raised on Tuesday night were threats to a Bush Forever site in Norman Road and vegetation on Soldiers Road, the proposed closure of Soldiers Road and the need for large walls to block out noise from freight trains.

The proposal to stop right turns from Mundijong Road into Paterson Road and divert motorists to Adonis Street to stop short stacking had residents concerned it would cut off the centre of Mundijong.

A resident said she already found it difficult to exit Adonis Street to Mundijong Road and this proposal would make it much worse.

The theory that less people would need to leave the area as more services became available, placing less pressure on roads such as Soldiers was met by laughter with one man pointing out ‘we still need to get to work’.

One person commented the plan would ‘cripple the townsite’ while another described it as ‘getting more farcical by the minute’.

President John Erren thanked Mr Schonfeldt for attending the meeting saying it was ‘no easy task to defend something that doesn’t feel too flash’.

He called on the public to make submissions and to understand there would be lots of opportunities for the council to lobby for the freight rail line to be moved.

Mr Erren said after the meeting the proposed amendments were ‘unpopular and not supported by councillors’.

Chief executive Richard Gorbunow said the current advertising period was considered preliminary and the item would be presented to the council once the public comment period ended and feedback had been considered.

He said the concepts in the plan would be further developed.