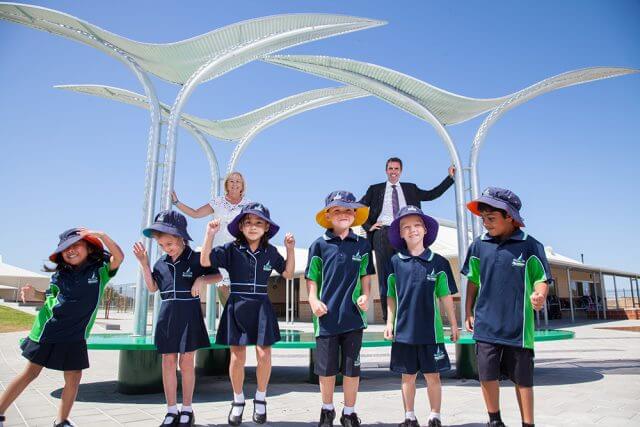 Harrisdale Primary School has hit the ground running in its foundation year after officially opening on Tuesday for an already at capacity 518 kindergarten to year six student cohort.

School principal Karen Duncan said she was really excited the school was finally open and it would become a community hub.

“In a community like this that’s so big and growing every day the school becomes the hub,” she said.

“Opening the school means the community has a focal point, a place they can support and take their kids to, education and realise their dreams for their families.”

She said the school would be a great environment for learning.

“It’s a beautiful school, one of the things the architects have done well is create lots of boulevards of trees,” she said.

“So whilst at the moment they haven’t matured you can imagine in a couple of years time there will be this canopy of lots of trees providing lots of shade.

“Being a new school we’ve put in state of the art facilities, iPads in our early childhood, Mac books in our older classes.

“Every class has a projector that projects onto a whiteboard, that whiteboard then becomes interactive.”

Ms Duncan said the school would be digitally focused and hoped to move down the science and environment path.

“The modern facilities cater for the needs and aspirations of all local families, and high-quality and innovative teachers are supporting every student to reach their potential,” he said.