Pfizer COVID-19 vaccinations are now being offered to West Australians aged 16 to 29 as the State Government moves into a vaccination blitz.

The government expanded eligibility for the COVID vaccinations on Monday, August 16, to enable more residents to get the jab.

Individual’s aged 16 to 59 can now receive the Pfizer vaccine, with individuals aged 60-years-old and above eligible for Astra Zeneca.

The expanded eligibility criteria means more than two million Western Australians aged 16 years old and over are eligible to be vaccinated in WA Health clinics.

This change in eligibility coincides with WA’s two-week vaccination blitz, where it is expected more than 160,000 vaccine doses will be administered over the fortnight which began on Monday, August 16.

On Monday, a new vaccination clinic at the Perth Convention Exhibition Centre was opened, and will have extended hours from 8.30am to 6pm seven days a week until August 29.

More than 157,911 Western Australians have booked to take part in the two-week vaccination blitz.

Another clinic will also be opening on September 6 at Midland’s Centrepoint Shopping Centre.

Member for the East Metropolitan Region Matt Swinbourn said he is proud of the effort the under 30s have gone to in order to book their vaccinations.

“Since the opening of the vaccination program to under 30s, they have shown us all how it is done,” he said.

“Incredibly, over 73,000 bookings were made by under 30s within 24 hours of them becoming eligible.

“They understand that rolling up protects not only themselves, but also their families and the community.

Some residents are concerned about the effectiveness of the Astra Zeneca vaccine, but according to Minister for Health Roger Cook expanding the Pfizer rollout to above 60s is up to the Commonwealth.

“At the moment it’s safe for people 60 and over to receive the Astra Zeneca vaccine,” he said.

“There was an explicit agreement at national cabinet that for 60s and over that we provide Astra Zeneca for that particular cohort.”

According to Mr Cook, the Doherty Report released to the public by the Commonwealth said a significant cause for concern with the delta strain is the spreading of the virus from youth.

“With delta the younger cohorts are the ones that can transmit the disease to the more vulnerable populations,” he said.

“We now have over 80 per cent of our 70 plus cohort that have received at least one dose of their vaccine.

“It is a safe product and very effective.”

Member for Armadale Tony Buti had his final vaccination on August 13.

“I urge everyone to make a booking for their free shots as soon as possible,” he said. 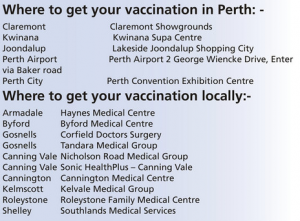