The veteran P&C president of a Thornlie school that was devastated by a suspicious fire last week has praised the community for their amazing response to the crisis.

Ten firefighting appliances from Maddington, Vic Park and Canning Vale took a little under an hour to bring the blaze under control, however the damage – an estimated $500,000 worth – had been done.

DFES investigators were unable to determine a cause due to the collapsed structure, and the Arson Squad are still investigating. 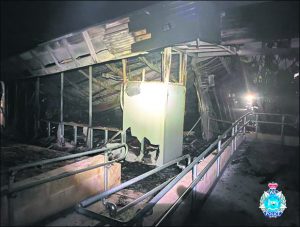 Yolanda Honey has been president of the Yale Primary school P&C for six years, and she said she woke up last Thursday morning to messages from the school board and concerned parents.

“I was shocked at first that something like that could happen to our primary school,” she said.

“I thought initially that maybe it wasn’t that bad, I know there have been a few small fires around lately, but to actually see the photos of the damage was devastating. “

Silver linings after an incident such as this are increasingly hard to come by, but since Thursday morning Ms Honey said the P&C had been inundated with offers of support from the community.

“We’ve been trying to liaise with parents and really deal with their concerns, there’s been a lot of activity on our Facebook page, and we’ve been working with the school to get information across about what’s happening.

“We’re trying to raise funds and to get donations, because we can’t access the school and a lot of the students don’t have pencil cases, stationary, nothing.

“We’re trying to get donations from business, we’re setting up a GoFundMe because a lot of people have been asking where they can donate.

“That’s the one good thing that’s come out of it, the community spirit has been fantastic, people wanting to help, everyone is willing to give their time or their money and it’s been fantastic to see”

“This way there’s no major disruption to their year, they’ve got a classroom and they can keep learning at their host schools.

South Thornlie PS have lost their music room, but their support is fantastic and they’ve all been really accommodating.”

As for her own daughter, currently in year 6, Ms Honey said she was taking it in her stride, but she has concerns for the younger students.

“My daughter is in year six and she’s coped quite well, the year sixes are at the high school so it’s been a good transition and I’m trying to put a positive spin on it for her,” she said.

“Some kids are struggling, my daughter was devastated by the fire but she’s coping, it’s the young pre-primary and kindy kids that don’t understand why they can’t go back to their school, they’re struggling a little bit.

“We’ve been told that once they deal with the clean-up, they’re looking at three weeks which brings us to week 10, right at the end of the term so I’m not sure if they’ll wait until the next term but the Principal Glen Read just wants to get back to some normality so we’ll wait and see.

“With this and the COVID situation, it’s a lot.”