Home Armadale Cheering for the champions 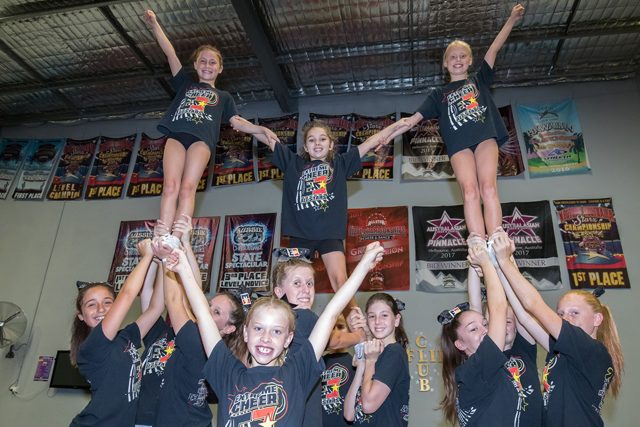 A Canning Vale cheerleading squad is the first ever team in Australia to be selected to compete in a major event on the cheerleading calendar in the US.

The team, called “Ignite”, performed at a two-day event at the Perth Convention Centre in October last year taking top place after competing against at least five other teams.

Team member Ella Sorgiovanni said her and her teammates were shocked when they heard the results.

“We have 14 girls, ages eight to 14 and this is a two-day competition and you have to get 100% – no deductions, which means nothing can go wrong,” the Maddington resident said.

“We sat in front with all the other teams and the MC announced who came second and third and we can first and we got really excited.

“That’s when we found out we were going to the Summits in Orlando, Florida – we were all really thrilled.”

Ella’s coach Annalise Kerr, has been involved in the sport of cheerleading for 10 years.

Ms Kerr said the gravity of winning the competition and competing in the US took time to sink in.

“This is a big deal – we’re a small gym and we only have 100 kids and to be the first team in Australia to get the bid is massive,” Ms Kerr said.

“The girls are extremely excited but it is going to involve hard-core training, so the girls know they will have to train two to three times a week, about six hours plus on top of their normal schooling and other teams.

“This is a super squad team, with girls aged seven to 14 years old and they will train especially for this event on top of their regular training,” she said.

The sport of cheerleading has slowly been gaining popularity, according to team member Ella Sorgiovanni and something that has taken off in recent years.

“Cheerleading is like AFL over there – it’s massive but is growing here in Australia now,” she said.

While the announcement the team will be heading to the US to compete against other international teams has dominated conversations among team members, Ella’s mum and fundraising coordinator Tracey Sorgiovanni said the focus is now on how the team will get there.

“It is estimated that each athlete will cost approximately $5000 inclusive to have them attend the event,” Mrs Sorgiovanni said.

Then also have our Major Fundraising event ‘Bogan Bingo’ on Saturday 10th March in Thornlie. $25 per ticket. There will be lots of Silent Auction items, Raffles, Games and a really great night overall.

Snags for a good cause

Money raised from all walks of life for fires