Last week City of Gosnells councillors voted to start the process of introducing the new local law, which would give it the power to fine residents up to $400 for a number of waste offences.

According to the city, its first priority was to educate the community on the environmental issues relating to waste and recycling.

But a further concern was the number of people placing inappropriate items in rubbish bins such as gas bottles or asbestos.

Hazardous material collected from rubbish bins had led to several fires in the city’s waste trucks over the past years, putting lives and trucks at risk.

Mr Cowie said about 20 per cent of community effort in recycling was currently wasted because some people put inappropriate items in recycling bins such as oils.

“These cause significant economic and environmental costs to the community, specifically to those trying to do the right thing,” he said.

He said in the case of the waste truck fires, the city had a procedure in place that enabled truck drivers to provide people with a notice when they had placed items that were entirely inappropriate in their bins.

“If a resident persists with placing inappropriate items in bins a representative of the city will have a chat with the resident,” he said.

“Infringements will only be issued as a last resort for repeat offenders.”

According to the proposed waste local law, offences would include putting the wrong waste in bins, failing to keep a bin clean and in ‘a good condition and repair’ and failing to prevent the emission of offensive odours from a bin.

Mr Cowie said bins would be considered ‘unclean’ if they smelled foul after emptying or if they contained residual waste such as foods or liquids that were likely to emit offensive odours or encourage the breeding of flies or mosquitos.

He said in the case of strata developments where there was no individual ownership of bins it would be the strata company’s responsibility to ensure that their caretaker kept bins clean.

The city previously adopted a waste local law in 2011 but it was disallowed by the Parliament’s Joint Standing Committee on Delegated Legislation, which cited the ‘unreasonably prescriptive nature of many offence provisions’ within the local law as its reasoning.

Since then the Western Australian Local Government Association, in association with the committee, the Department of Local Government and the Waste Authority developed a template waste local law, which the city’s proposed law has been modelled on.

The proposed local law would be advertised for public consultation in mid-September with a six-week public comment period.

Residents can make submissions during the consultation period by emailing their comments to council@gosnells.wa.gov.au.

Tank commander has his day

Plans for Maddington intersection under way

Residents feud with City of Gosnells over empty lot

Tony gets the jab 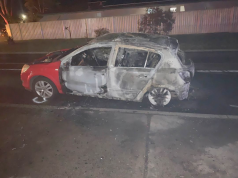