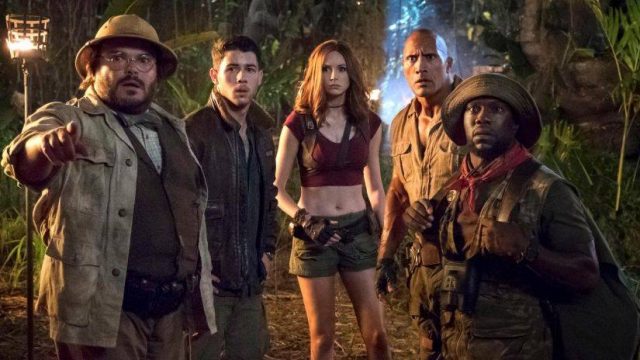 As a 90s kid I was a little apprehensive about watching the rebooted version of Jumanji as I could not fathom anyone replacing the late great Robin Williams and I was worried my childhood classic would be ruined forever.

However, while the movie was nothing like the original and did not have the same magic as its predecessor it was still surprisingly enjoyable, funny and heart warming.

Jumanji: Welcome to the Jungle, sees four teenagers sucked into a mystical video game where they transform into their characters hilariously played by Dwayne ‘The Rock,’ Johnson, Kevin Hart, Jack Black and Karen Gillian.

Despite being grown ups, they are still awkward and angsty teens dealing with typical issues including first love, taking the perfect selfie, worrying about good grades and learning to perfect the art of flirting, while trying to outrun killer ninjas and defeat the evil Van Pelt (Bobby Cannavale) and lift the curse which threatens the world of Jumanji.

There is a lot going on, but the family fun movie is action packed and sure to thrill the younger generation who weren’t brought up with the 90s classic.

For anyone in their early 20s and above be opened minded, just because the latest version doesn’t have the iconic monkeys riding a motorbike, or Robin Williams doesn’t mean it ‘s not a fun movie to watch on a lazy summer afternoon.

The sound of beating drums is sure to bring back memories and the homage to Alan Parish will definitely make you feel nostalgic, so wether you’re young, old, somewhere in between the latest Jumanji movie has something for everyone.