Home In the news Leave our school alone 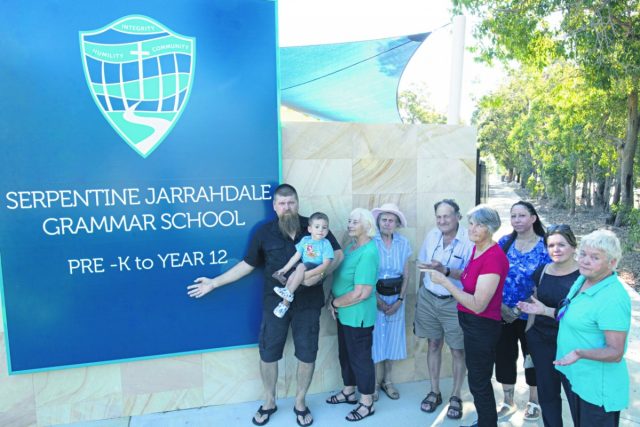 The original announcement to change the name of the 12-year-old school was made on February 2 at the annual Sir Charles Court Futures Assembly in front of students, parents and board member Ken Court and his family.

However, the announcement has ruffled the feathers of many foundation members, who say they were completely shocked and blindsided by the decision.

Foundation board member and past chairman for the Parents and Friends Association of Serpentine-Jarrahdale Grammar School Rod Vogel said the name change was completely wrong and shouldn’t be happening.

Mr Vogel started the online petition soon after he heard of the announcement and said he had spoken to all of the original guarantors, bar one, and none of them were in support of the change.

“We didn’t donate the money for Ken to build an ivory tower with his name on it; we donated it for the community.”

The Bett family, responsible for donating the land the school is built on, said they were equally annoyed about the decision and were highly disappointed with the board.

Lisa Brazier spoke on behalf of the Bett family and said they were against the school being named after one person or one family.

“We have been pressured by people in the community to stand up and ask for it to be named Bett Grammar School, but we are not for that at all,” she said.

“This is a community school and the community own it. Serpentine-Jarrahdale speaks community.”

In the original announcement, the board said the name change coincided with the recent growth of the school, which now has more than 600 students from pre-kindergarten to Year 12.

Principal Patricia Rodrigues said she was very excited about the name change and felt honoured that the Court family chose Serpentine-Jarrahdale Grammar School to take on their respected name.

“It is custom and practice for schools to have a name linked to a patron or historical figure and it is now time for us to take that step,” she said.

“We look forward to the future we are building for many generations to come.”

The board said the name ‘Court Grammar School’ would be effective as of January 1, 2019.