An artist who grew up in Roleystone is holding a major exhibition next weekend on May 29 and 30 with his main featured piece being a helicopter he painted. 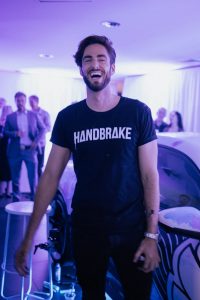 Hans Bruechle, also known as HandBrake, is presenting his second solo exhibition ‘Chaos Rising’ next weekend with the focus being a hand-painted turbo-charged Robinson R66 helicopter.

This isn’t the first time Mr Bruechle has painted a vehicle, as he painted a Porsche Taycan in front of a live audience at the car launch in Perth on February 26.

Mr Bruechle grew up in Roleystone, he said growing up in the hills hasn’t influenced his art in the way that’s typically expected.

“We lived deep in the bush, we couldn’t even see our neighbours so I spent a lot of time out there by myself,” he said.

“If you look at my work, the Australian bush doesn’t really feature in my work, in fact I probably steer away from it.

“My time out there, what it did teach me was how to be in my own company and how to lock into my imagination.

“I used to go ride my mountain bike or my motorbike through the bush, a lot of the time by myself, and I think that’s how I developed a vivid imagination.”

The ‘Chaos Rising’ is a free exhibition that runs over two days with an 18+ event on Saturday May 29 from 6.30pm to late and a family-friendly event from 9am to 5pm on Sunday May 30.

The Saturday night event will feature free food and a bar available to purchase drinks and free live tattooing of HandBrake designs, courtesy of Artful Ink.