Home Armadale Half a million reasons to smile

A community run and funded Op Shop in Kelmscott is so close to achieving their donation goal they can almost feel it.

The Second Chance Op Shop on Railway Avenue has provided more than $469,000 in financial assistance to the communities of Armadale, Serpentine Jarrahdale and Gosnells.

The op shop is a registered charity that was developed eight and a half years ago to raise money for other charities and not-for-profit groups.

Treasurer for Second Chance Rosalyn Hayman said the charity has supported 218 groups, and connected with a number of homeless groups and women’s shelters by providing clothing and other items.

“We help local schools and play groups with bits and pieces for their classrooms and play equipment including mud kitchens,” she said.

“It’s not just always financial assistance that we give, sometimes the goods can be just as important as the money.

“Our goal is to break half a million by Christmas.”

“Back in August we supported the Armadale branch of the Wildflower Society,” Ms Hayman said.

“That helped them with their big display for their 60th anniversary.

“We also helped Comets Softball Club and the Kelmscott All Abilities team.

“Over the past eight years we have supported men’s sheds, sporting clubs, orchestras, youth groups and more.

“Any registered charity can apply for grants from us.”

Second chance owe it all to the community, Ms Hayman said that the community and volunteers are how they’ve kept going.

Due to the nature of the op shop, they rely on community donations in both goods to be sold at the shop and financial contributions to keep running.

“Volunteers come in to do the sorting and pricing, and then the community coming in to shop has allowed us to do what we do.

“We are entirely run by volunteers, and we are desperate for new volunteers to join us.” 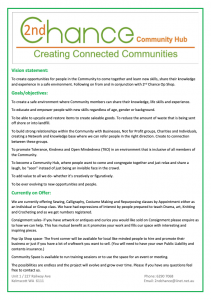