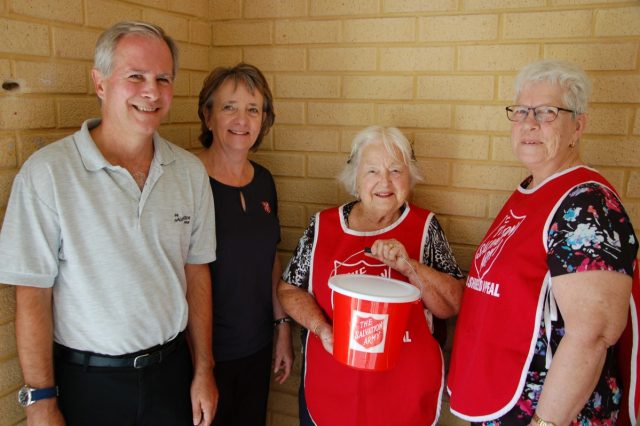 The Salvation Army Armadale is raising money through the Red Shield Appeal and accepting donations at the Armadale Shopping City later this month.

The appeal is in its 56th year and is the Salvos flagship fundraising appeal, which aims to raised $32 million to fund more than 200 centres and services across Australia.

In Western Australia alone, the Salvos are aiming to raise $7 million through the appeal.

Salvation Army Armadale volunteer Pam Pitt said this year the funds raised in Perth’s southeast will go directly back into the area.

“We currently have an Emergency Relief Program where people come and receive food parcels and help with utility bills, which is interview based,” she said.

“So we spend time getting to know people and how best we can help them as well as where we can refer them to.”

“One of our volunteers is quite knowledgeable on Centrelink benefits and things like that so she’s able to speak into that space a little bit more than we are.”

“We currently offer that on a Wednesday morning and so we are looking to develop that on another morning as well.”

The Armadale Salvation Army is currently looking at expanding and utilising the space at the front of their headquarters and develop it into a community centre.

“We started a craft group on a Tuesday as a safe space for people to come and we’re hoping to develop so we can have that open space,” Mrs Pitt said.

“We’re right across the road from a school so we’re hoping that we can provide people with a space where people can just come grab a coffee and make some new friends.”

To fundraise for the Red Shield Appeal the Salvation Army Armadale will have volunteers at Armadale Shopping City from May 17 to 22 collecting donations.

Otherwise they encourage people to donate or volunteer to collect donations via the Digital Doorknocking initiative at https://digitaldoorknock.salvationarmy.org.au.