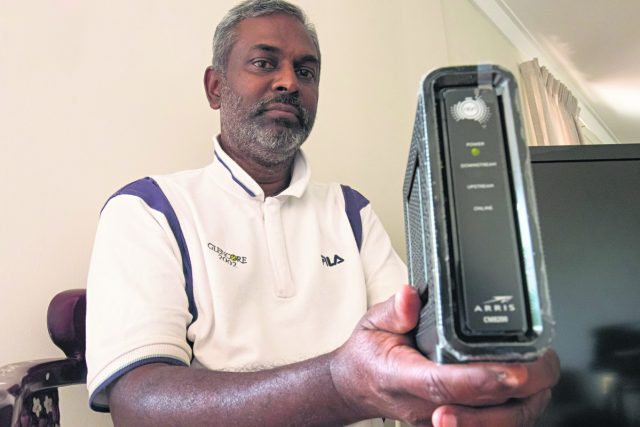 With the National Broadband Network (NBN) rollout now in full swing, issues with the installation of the national infrastructure project are increasing, with multiple residents reporting issues with their connections over the past six months.

Mr Ramanathan said for him it’s an inconvenience, but for his wife – a teacher – and young daughters it affects their daily working and studying lives.

“It wouldn’t be so bad if I knew anything about what was going on,” he said.

“I’ve been in contact with my ISP (Internet Servie Provider) and with the NBN people and haven’t heard anything back really and zero internet.”

Mr Ramanathan’s issues started on March 14, when the internet suddenly dropped out.

The connection was intermittent but following an inspection by an NBN technician, Mr Ramanathan lost all connection.

After more days went past and answers were not forthcoming, Mr Ramanathan said the technician had checked all connection points in his house had replaced the modem and had received word from the Eastern States that the issue would be remedied.

Currently Mr Ramanathan is hoping work being done will re-establish his connection sooner rather than later.

“My ISP has done their level best to try and contact the NBN to find out what’s going on,” he said.

Jane McNamara, Head of NBN local, said Mr Ramanathan had taken the correct steps and that NBN was attempting to solve the issue.

“We are a wholesaler so our relationship is with the retailer, who should be the direct contact point for residents and business, it is important that any concerns or queries should be directed to your provider in the first instance,” she said.

“This resident has followed the correct process by calling his ISP first to raise he was having connection problems.

“The ISP has identified the connection problem is linked to NBN and we are currently investigating to get to the source of the problem.”

Issues associated with NBN infrastructure have long made headlines, with the capability of existing networks being put into question.

Ms McNamara said the company was acutely aware of the publicity behind timeframe and connection issues and that they had been working to re-establish solid systems to ensure households are connected.

“There are a range of factors that can impact a resident’s service but almost nine out of 10 times (88 per cent) we get NBN equipment installations under our control, different to ISPs, right the first time,” she said.

“We have implemented new diagnostic tools to help us better detect the cause of faults and improved processes between NBN and retailers to help us resolve faults quicker.

“We are now resolving faults within agreed timeframes with retailers 88 per cent of the time compared with 85 per cent this time last year.”

Old or broken exchanges and nodes have been a constant problem in the rollout, but Ms McNamara said this has been a priority over recent months.

“Where possible we will look to upgrade existing technologies in order to roll out the network as quickly and efficiently as possible,” she said.

“This may mean that sometimes we prioritise building the network to one part of a region before installing new infrastructure in another part of the area.

“Where the existing infrastructure is not up to scratch, we will remediate.”