Artist Hans Bruechle, also known as Handbrake, held an art exhibition over the weekend – the highlight being a helicopter he had painted.
Mr Bruechle grew up in Roleystone for much of his childhood, which helped spark his imagination and creativity.

A special 18+ event on Saturday May 29 saw members of the audience get tattooed with Handbrake designs and cocktails with art printed on top.

“It was a crazy night, with around 500 people in attendance across the whole night,” he said.

“The doors opened at 6.30pm and by 6.35pm all of the booking slots for tattoos had been filled.
“They must have done more than 50 tattoos with my designs.”

The audience was left wondering where Mr Bruechle found the helicopter.

“The helicopter belongs to my business partner’s father-in-law, who’s a really lovely guy,” he said.

“I’ve been asking him if I could paint the helicopter for about two and a half years and he kept saying no and turning me down.

“Then I think when Porsche called me and let me paint their new car earlier this year, he said if Porsche was letting me do it then maybe he could let me do it too.”

Getting the helicopter into the venue presented it’s own hurdle, as getting it inside the Old Pickle Factory meant flying it onto the street and wheeling it inside. 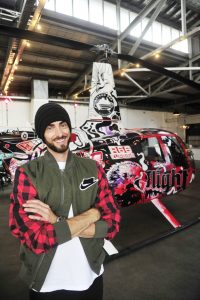 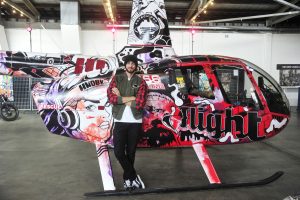 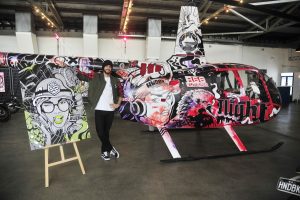