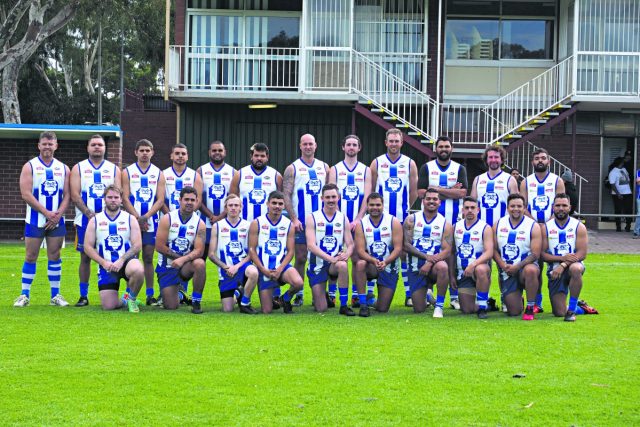 More than four decades after it was first unveiled, the Kelmscott Bulldogs Football Club logo has finally made it onto the club’s new league team jumpers.

The new jumpers were unveiled to spectators and club supporters during last Sunday’s game – the first home game for the club since the season began.

The original Bulldogs logo was first released in the mid 1970s by former life member Trevor Riley, and featured as a transfer emblem on club jumpers in the late 70s and early 80s.

According to club coordinator Rob Turner, designing and producing the new jumpers had been an extensive but worthwhile process.

“It has taken a very long time to get the dog on a club jumper,” he said.

“After winning the 2019 Grand Final, we decided to reward the players with new premiership jumpers.

“There has been a lot of work to get the dog onto the new replacement jumpers, from the design of the old logo based on the original publications, to the trademark registration of the logo and the new jumper production process.”

The team has started the season in top form, winning the first two rounds to secure top spot on the ladder.