Young Shayla Davey-McDonald made a brave decision earlier this year to dodge the scissors and grow her hair as long as possible for charity.

That was until yesterday when the six-year-old courageously cut off her luscious locks so it could be made into a wig for someone who has lost their hair due to a long-term medical condition. 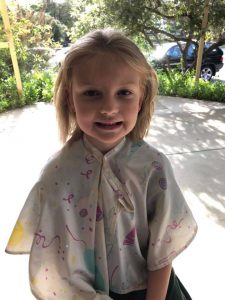 Shayla’s mother Kaitlyn Davey said she was incredibly proud of her daughter’s efforts.

“Shayla has always had long hair and decided she wanted to get it cut short,” she said.

“We then began talking about Variety’s Hair with Heart and what they do with the hair sent in and Shayla thought it would be a great idea to fundraise and send her hair in to be made into a wig.”

Denise Terry from Emerald Hair Design donated her time to perform the cut yesterday in front of Shayla’s friends and family at One Tree c- Verse Mundijong.

Shayla has so far raised about $800 in addition to the hair donation.