The competition aimed to encourage and celebrate a love of learning languages in Australia.

Eighteen-year-old Beckenham resident of Russian descent Katerina Buck was one of the 72 finalists chosen by SBS and Community Languages Australia.

She went on to win the People’s Choice Competition Award in the senior category and was flown to Sydney on October 8 where she was awarded her prize.

“To enter all that was required was to write a text answering what learning a language other than English means to you,” she said.

“I am learning Russian because it is an essential part of me.

“The sounds of Russian for me are the sounds of music by Pytor Ilycih Tchaikovsy, Dmitri Dmitriyevich Shostakovich, Sergei Sergeyvih Prokfiev and other Russian and Soviet composers.”

Miss Buck said the competition was initially just a test for her to see how quickly she could come up with an answer in Russian but eventually become something more than that.

“At the time I was preparing for my Russian WACE exam,” she said.

“After writing out my essay for the competition I realised that I was proud of what I wrote and submitted it as my entry.

“It was really fun and an interesting experience which allowed me to meet a lot of inspiring people.” 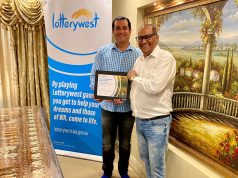