The magic is back with Disney’s Frozen II making its way to cinemas this Thursday across Australia, and its much awaited arrival has lived up to more than first expected.

The question being asked in the sequel to one of the highest grossing Disney animations of all time ($1.3 billion worldwide) is why was Elsa (Idina Menzel) born with magical powers?

In Frozen II, which takes place three years after the 2013 original, the answer is calling to her and threatening her kingdom of Arendelle but with sister Anna (Kristen Bell), friend Kristoff (Jonathan Groff), snowman Olaf (Josh Gad) and reindeer Sven she sets off into the unknown on a dangerous but amazing adventure.

Despite critics in the US claiming Frozen II contained a complete melt down of magic when compared to Frozen, Aussies are bound to fall in love with the all new storyline that features a bit more of a dark side and a clear, concise message of female empowerment thanks to Elsa’s inspirational movement to overcoming personal challenges.

With filmmakers’ inspiration coming directly from Norway, Finland and Iceland, and the movie set against an autumn backdrop, co-director Chris Buck said the world gets a little grittier for the characters, a little tougher, and there is a lot of change happening. The fall season reflects the maturity seen in Elsa, Anna and everyone else and with the change of seasons came a beautiful new palette of rich autumnal colours filmmakers never explored before.

Frozen II also delivers seven original new songs by Kristen Anderson-Lopez and Robert Lopez bound to get the young ones singing over and over again with Some Things Never Change a beautiful introductory melody at the beginning, and Into The Unknown sure to become just as iconic as Let It Go.

The film is bound to be pulled apart, poked and prodded by critics globally, but as a self-confessed Disney tragic, Frozen II has lived up to its expectations and is by far another stunningly created animation that will see families fall in love all over again with Elsa, Anna and the rest of the gang.

Review: 5 out of 5
Rating: PG
Production: Walt Disney Pictures
Out in Cinemas November 28 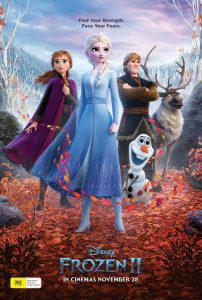