Following a series of alarming incidents, two councillors are urging the local community to band together and protect one another.

Residents in Watersby Crescent have expressed serious concerns over Prisoner’s Point being used for drug deals.

On numerous occasions, drug paraphernalia has been found along the Shelley-Rossmoyne Foreshore.

Riverton Drive has also become a hotspot for hooning motorcycles and speeding cars late at night.

City of Canning councillors Amanda Spencer-Teo and Ben Kunze are calling for an increased police and ranger presence in the aforementioned areas.

“We have asked if the city can consider installing permanent CCTV at Prisoner’s Point around the Shelley Sailing Club,” Cr Kunze said.

“We have also asked if the city may investigate opportunities to address the ongoing anti-social/criminal activity along the foreshore, and to consult with the local community to identify hotspots and possible solutions.”

The councillors are encouraging anyone who witnesses illegal/anti-social behaviour to contact the proper authorities.

“Everyone has the right to feel safe where they live,” Cr Spencer-Teo said.

“We need to do everything that is practicably possible to address anti-social behaviour and reduce the impact on the local community.”

The city has already taken steps to address the issues at-hand and to provide further community protections.

“The city works very closely with the WA Police on crime prevention and crime response throughout the City of Canning,” a City of Canning spokesperson said.

“Since December, the city has dealt with three incidents of graffiti along the Shelley foreshore, all of which were removed quickly.

“The city has also received a report of some anti-social behaviour in the same area.

“In response, the city’s Ranger and Community Safety Service has increased patrols and deployed a mobile CCTV unit to the area in an effort to detect and deter activity of this nature.” 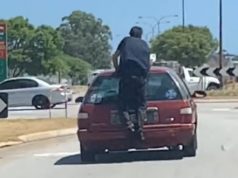