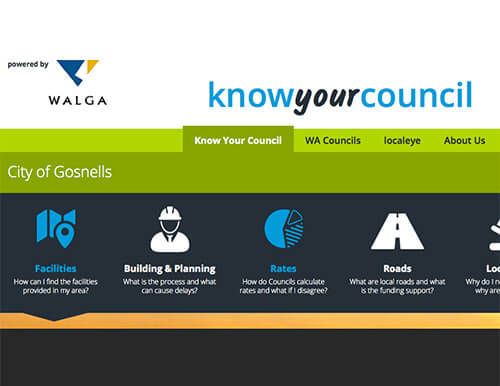 The WA Local Government Association has been forced to correct errors on its Know Your Council website despite being launched to provide greater clarity than the State Government’s MyCouncil site.

The State Government launched MyCouncil in April to encourage greater transparency in the local government sector.

WALGA launched its own website last month in response to what it said was the potential to misinterpret the rates information on MyCouncil.

Last week The Examiner questioned WALGA and the Department of Local Government after discrepancies between the sites were found in the statistics provided for a number of local governments.

In one instance the statistics provided for the Shire of Serpentine Jarrahdale for the year 2013/14 by each website had a difference of $3.5 million for the amount of rates levied and $5.5 million difference in revenue.

One site listed the number of employees as 110 while the other put the number at 125.

The population and number of electors were also different according to each site.
WALGA did not respond to requests for comment but the website has since been updated to provide statistics for the year 2014/15.

City of Gosnells chief executive Ian Cowie confirmed errors found in the Gosnells entry had been a result of the incorrect year being listed.

He said the city had alerted WALGA about the error following questions from The Examiner.

Information about a local government’s demographics and size was sourced from the Australian Bureau of Statistics.

According to a WALGA media release, Know Your Council includes rates information from independent financial analysts RJ Back and Associates.