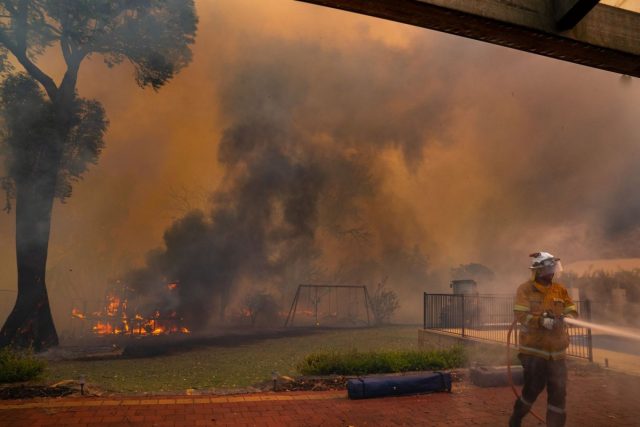 Throwing in the towel has taken on a whole new meaning as a now ex-member of the Roleystone Volunteer Fire Brigade (RVFB) threw his pants into the middle of the council chambers at Monday night’s council meeting.

On June 28, council deferred the consideration of a request from the RVFB, which would require the city to deregister the brigade and have DFES assume responsibility for bushfire response within the Roleystone Turn Out Area.

About 50 members of the brigade were dissolved and dismissed on Monday, October 11 as council made the decision to abolish the brigade and create a new stand-alone brigade.

Only eight members of the brigade have expressed interest in volunteering for the new stand-alone Roleystone-Karragullen brigade.

City of Armadale Chief Executive Joanne Abbiss said the report presented to council stated around 28 people had expressed interest in joining the brigade if split.

Members of the public and the Volunteer Brigade stepped up at the meeting during Public Question Time, begging the council to make a decision and asking questions to clarify the council’s understanding of the wants of the community.

One member of the public queried whether council had confirmed that some members of the brigade supported a stand-alone brigade.

“The city arranged a meeting between interested councillors and representatives that wish to stay with the city, as well as a meeting with the management committee of the current brigade,” Ms Abbiss said.

During the council discussion, councillor John Keogh requested standing orders be put aside to open debate, so councillors could freely discuss their opinions and views.

The request was accepted but some councillors said they felt pressured into making a decision.

“One of the reasons we’re being forced into a decision is because some of the statements during public question time tonight have included the words ‘I hope you make a decision’,” councillor Kerry Busby said.

“I do wish this report had come through the first time, it would have helped us a lot with the recommendation.”

The report was provided to Ms Abbiss on Saturday October 9, with members of the public concerned that the decision was made in such a short period of time.

Meg Travers, a Roleystone local, expressed concern about the decision.

“You don’t spend $1.7 million on an idea you had the day before yesterday,” she said.

“The population of Roleystone and Karragullen is not forecast to change dramatically in the next 20 years, so the idea that this is needed for the future seems pretty far fetched.”

A major concern from those in attendance was the process of starting the operation of the new brigade but Ms Abbiss assured residents that fire and emergency services will cover Roleystone following the decision.

“The Roleystone town site will continue to be serviced by the Roleystone Volunteer Fire and Rescue Service,” she said.

“The newly established Roleystone Karragullen Volunteer Bush Fire Brigade, to be housed at Springdale Park, will service the Roleystone area outside the town site.

“Council agreed to construct a new $1.7M purpose-built facility at Springdale Park within the next 12 months for the new brigade.”

Councillors John Keogh, Colin Campbell and Shanavas Peter voted against the motion, which was put forth by Hills Ward Councillor Grant Nixon and seconded by Councillor Caroline Wielinga.

Federal Member for Burt Matt Keogh said he was concerned with the Armadale council’s decision, due to impact on brigades within his federal electorate.

“The decision to abolish the volunteer bushfire brigade before it’s replacement is up and running is very concerning,” he said.

“It will put more pressure on other brigades that are further away.”