In August, Chloe Cook was driving to work when she was T-boned at the intersection of Bickley and Belmont Roads in Kenwick, trapping her in her car just a kilometre from home

The young mother was pregnant with her son Teddington, when a good Samaritan came to her rescue.

Now Chloe would like to say thank you to the helpful stranger.

The only memento she has of that day is the jacket the woman gave Chloe to keep her warm. 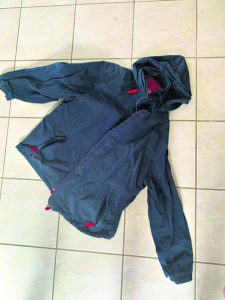 The accident happened on August 12.

“I was on my way to work and I was hit by another car, the driver’s side of the car was caved in and I was trapped in the vehicle.

“I knew I was hurt but I didn’t know what it was.

“I was in the car, dazed and this woman came into my car and sat with me, she was quite reassuring; she let me know that an ambulance was on its way and she got out my phone and called my partner to come down.

“She helped me through a really terrible time.

“I was 24 weeks pregnant, I was hoping the baby was okay, I was worried that I might be bleeding.

“I thought a lot about my daughter who wasn’t in the car, I needed to push through it for her.”

The accident left Chloe with four fractured vertebrae, but amazingly she had no other injuries.

“The lady checked if I was bleeding and I wasn’t so the baby was okay.

“My back is still a bit sore but they were stable fractures so I was able to walk. I had to stay in hospital for a few days because they couldn’t scan my back because of the baby. “

As for the identity of the woman, who later spoke to Chloe’s partner when he arrived on the scene, she has no idea.

Police and ambulance officers have no record of her at the scene, but the jacket is proof she was there.

“I can’t remember what she looked like, I know she was middle-aged, with light hair, but I was in and out.

“My partner spoke to her to, he was helping me and the person in the other car so in the middle of it he didn’t get a name.

“She said she lived locally and she pointed in the direction of Bickley Road so I’m pretty sure she might be a Kenwick local.

“I probably would have lost consciousness if she wasn’t there, she was talking to me and keeping me alert and she gave me her jacket to keep me warn.

“I just want to thank her for being there for me and my unborn child, I don’t thin we’d be where we are without her, we’re perfectly fine now and I’d like her to know that.”

If you are the person who helped on that day, Chloe asks that you contact Examiner Newspapers, and we will pass your details on.