Home Gosnells Military base for Gosnells

Gosnells could be home to a new military facility if a defence industry expert’s plan comes to fruition.

Billed as the Champion Defence Facility, the site could occupy 583 hectares between Tonkin Highway and Champion Lakes, making it twice the size of Campbell Barracks with potential for more than 4180 homes on residential land.

It’s the brainchild of Lance Scott, the WA president of the Royal United Services Institute for Defence and Security Studies, and while he readily admits the plan is still just a public conversation, he has already had discussions with City of Gosnells Mayor Terresa Lynes and Deputy Mayor Adam Hort.

He said the placement of facilities in the eastern suburbs during the Hawke and Keating governments had left WA defence without certain types of basic facilities, and that current discussions around the enhancement of defence in WA were well-meaning but focused in the wrong direction.

“When the discussion came about moving units into WA, it seems obvious that the types of units you’d want to move into WA would need the types of facilities we don’t actually have in WA anymore,” he said.

“So there needed to be a new location.

“I looked around and it turns out that a really nice precinct along Tonkin Highway opposite Champion Lakes was perfectly located.

“It’s on a main supply route with major highways connecting straight to Perth airport, a super-convenient location to get to Jandakot airport, airfields and ports like Fremantle and Stirling.

“It’s not in the most expensive real-estate in Perth which is always good for anything the government’s going to be involved in, and it’s in enough space to build a facility that would punch on for more than 100 years.”

He said the most crucial aspect of his proposal would be gaining the support not only of the government, but of local residents.

“It would be considered in all decision-making circles as a little bit terrifying if they didn’t already know how the public felt about the new facility.

“Nobody wants to make a decision and have 400 protesters turn up and make a scene.

“The government wouldn’t take it on if they thought anyone in the local sphere was going to fight it.”

And while his proposal is little more than a thought bubble – he admits that it were to get the go-ahead today, the first stage of development would be at least ten years away – Mr Scott already has an idea in mind for occupancy of the facility.

“We need a unit that defence has already kind of put somewhere out of harm’s way because they don’t know where to put it.

“The unit we should be asking for is the 3rd/4th Cavalry Regiment.

“In the big shake-up when they moved everything around out at Darwin, that Cavalry Regiment got moved from Queensland to Puckapunyal and put into suspension because Defence didn’t know where to put them, they had no facilities to base a cavalry regiment.

“That regiment would be ideal for this particular facility and appropriate for the defence of a vast state like WA.”

Mayor Terresa Lynes confirmed she had met with Mr Scott over his proposal, adding that the land had “significant potential” and she looked forward to the development of the land and the benefits it would bring to the community. 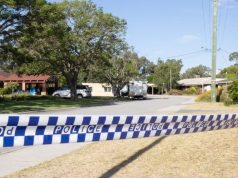