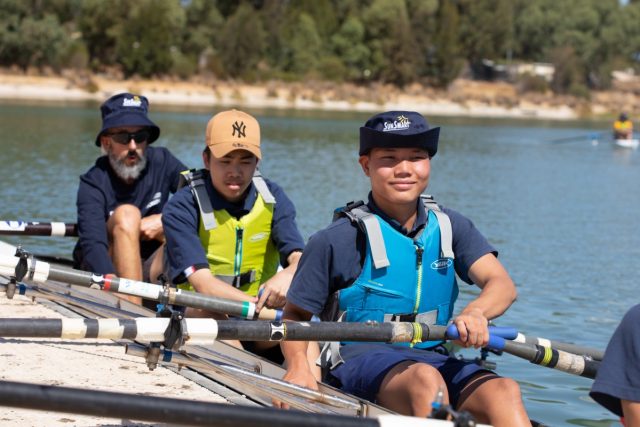 A rowing program at Champion Lakes is getting students out of the classroom and onto the water, to engage and support positive teamwork and behaviour.

Rowing WA piloted the Making Waves program in 2018 to give students in the Armadale area an opportunity to access rowing that they would not ordinarily receive.

Major sponsor of the program Wesfarmers have contributed to the ongoing vitality of the program, according to Rowing WA without the sponsorship the Making Waves program would have sunk.

Chief Executive for Wesfarmers Rob Scott grew up in the Armadale area for a portion of his childhood, and attended Rossmoyne Senior High School.

Mr Scott’s experience with rowing led to a deep support for the program.

“I had the opportunity to learn about rowing through a sports option down at Canning Bridge and I joined a rowing club… my rowing happened outside of the school environment,” he said.

“A few of us from my school were at the club, and we wanted to row at the Head of the River but we weren’t eligible because it was private schools event… not being able to compete stirred me on to continue my rowing at a state and national level.”

Mr Scott then went on to receive silver at the Atlanta Olympics in 1996 for rowing in a coxless pair.

Manager for Making Waves Daniel Gibbons said the program wants to encourage children who may be in a similar position and give them the opportunity to row in a public school environment.

“This program encourages kids who wouldn’t ordinarily get that chance to row,” he said.

Schools such as Kelmscott Senior High School participate in the program every year, but the organisers of Making Waves are hoping to expand the program.

“Currently we have the capacity to host about 200 children per term and 800 overall in a year,” Mr Gibbons said.

“We have some schools that come back regularly but we would really like to see more schools and students involved.”

“We also hope to expand and build a shed next to the Rowing WA shed at Champion Lakes Regatta Centre that would be specifically for the Making Waves program, we’re currently working with some of the schools to come up with specific classes for rowing and the idea is in the future they can use the shed for their equipment as well.”

“Each group that comes through identifies areas they want to work on as a team using the program,” Mr Gibbons said.

“We work collectively to achieve their goals as a class or group.”

Mr Scott said he took a lot out of rowing as a teenager and hopes the program can give other kids those opportunities.

“It keeps you healthy, there’s a really strong sense of teamwork required, people rely on you because it’s a crew sport and there’s a good sense of community around it and I benefited from that and I’m keen to see other kids have the same opportunity,” he said.