A modern twist to an ancient tale is Guy Ritchie’s latest movie King Arthur: Legend of the Sword.

Known for hits such as Snatch and Lock, Stock and Two Smoking Barrels only Ritchie could have pulled this off.

He cleverly combines cockney accents and fantasy to bring to life a well-known story with a fresh, contemporary feel to it.

Robbed of his birth right, Arthur (Charlie Hunnam) is the true heir to Camelot who is brought up by working girls in a brothel and grows up to become a well respected fighter while indulging in a bit of criminal activity now and again.

Meanwhile, the evil king Vortigern (Jude Law) is desperate to stay in control and rule Camelot but knows the true heir cannot stay hidden for much longer.

He begins to search the land for the one who can pull the sword from the stone and when Arthur comes forward revealing himself to be the true king the country is plunged into war between the powers of good and the darkness.

Aided by his knights and a mysterious woman known only as the Mage, Arthur must embrace his true destiny and wield the power of Excalibur if he is to save his kingdom and defeat Vortigern.

For many people the Arthurian legends are embedded in their minds drawing from hit shows such as Merlin, Jerry Bruckheimer’s King Arthur and the 1980s movie Excalibur, but Guy Ritchie’s film stands out from the others.

He is not afraid to be different and give Arthur a working class hero feel to him, which works great.

Also keep an eye out for the David Beckham cameo.

Out now on DVD and blu ray.

Video-game adaption knocked out in seconds 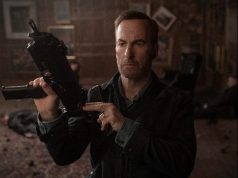