Home News in SJ Mystery of the BMX track $300k 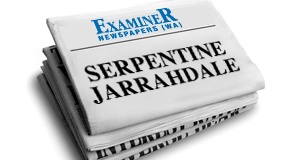 The fate of $300,000 slated for the Byford BMX track was in question on Monday night when Serpentine Jarrahdale Shire corporate and community director Alan Hart revealed the money was ‘no longer there’.

The revelations came to light at the ordinary council meeting when the council considered a motion to apply for state funding to help build the new BMX track.

The council had allocated $300,000 to build the track in the 2014-15 budget and at the time it was anticipated the Department of Sport and Recreation would provide a grant with the club also intending to raise a third of the total cost.

At the time Shire of Serpentine Jarrahdale president Keith Ellis touted the track as being ‘an integral part of the Briggs park recreation precinct’.

The $800,000 track was expected to be completed this month but the state government grant application was rejected in March and as a result the track was not included in the 2015-16 shire budget and work halted.

The fate of the funds was not questioned by councillors when they passed the budget on June 29.

This week the council considered whether the shire should apply to the state government for a grant in the 2017-18 funding round, which could have pushed the project’s completion out to 2019.

The item was an apparent last minute inclusion and was not included in the agenda made available to the public through the shire’s website.

During public question time Byford BMX club president Kevin Morrow said after being assured the track would go ahead the club had been left numb that things could change so quickly.

He said after much time and effort the club had found a way to halve the cost of the track to more than $400,000 and he asked the council to see its merit. Councillor Gary Wilson said the shire was committed to the track and moved that the council apply for a state grant in the 2016-17 funding round.

Councillor John Kirkpatrick spoke against the motion because it would push the project’s completion out to 2018.

He foreshadowed an alternative motion but did not outline the motion’s details.
Councillor John Rossiter said it was difficult for him to discuss the item because it had not appeared in his agenda.

Mr Wilson’s motion was lost with seven councillors voting against and two for.
Following the vote Mr Kirkpatrick moved his alternative motion that the council reallocate $400,000 to construct the BMX track.

He said the council should also accept the $50,000 the club had already raised to go towards the cost of the construction and accept the starting gates, which had already been built.

Mr Ellis suspended standing orders because it was the first time the council had seen the motion and he considered it to be ‘very bold’.

During the meeting’s suspension Mr Kirkpatrick said he believed the track could be built for $400,000 and the shire already had $300,000 set aside for the track from the previous year’s budget and could be completed as early as January next year.

Mr Hart said because it was not budgeted for this year there was no money and the council would have to divert funding from existing projects.

He said the money had not been carried forward because the grant had been lost and the shire would not know how much money they had until September, when the end of year accounts were examined.

When pressed by Mr Ellis, Mr Hart again confirmed the $300,000 no longer existed.
Several councillors expressed surprise the money had not automatically been kept in reserve or carried forward.

Councillor John Errin was deeply disappointed the money had ‘just gone away’. “I assume we couldn’t have run over budget by $300,000 so surely it’s somewhere nearby,” he said.

“At the moment we have a generation of kids who will have become adults before the park is completed.”

After the meeting resumed councillor Sam Piipponen said voting to reallocate $400,000 to the track would give false hope if the money did not exist.

Councillors agreed to change the wording of the motion to indicate they would investigate a reallocation, which was met with calls from the public gallery to add a time limit on council investigations, though this was not adopted.

The new motion to investigate the reallocation of $400,000 towards the track was carried unanimously.